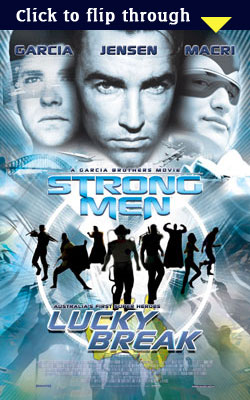 STRONGMEN™ is about mankind’s first discovery of teleportation.

STRONGMEN™ also reveals the dimension that exists beyond the visible spectrum.

Based on the Hit TV series of the same name, which broke all television licensing records over a decade ago, STRONGMEN™ is the first in a series of three films. The Trilogy begins with the first action assignment, LUCKY BREAK™.

STRONGMEN™ is to showcase mankind’s leap into The Gap, that place between the Earth Plane and the Metaphysical Dimension.

STRONGMEN LUCKY BREAK is a platinum cool big-as-Star-Wars saga which catapults a crash-hot band of bulging muscled heroes into a pressurized zone where no amount of muscle can pull them out of the scrape.

In the tradition of Buck Rogers, Flash Gordon, Commander Cody and the X-Men.

The epic new swash-buckling adventure full length feature film franchise sees the Strongmen do battle with an epidemic of Puttymen intent on wreaking havoc; an extra-terrestrial teleportation technology you have to see to believe; giant androids and deflecting bone-bending ray-blasts; and annoying aliens intent on manipulating world governments.

“Novels will never be the same again!” — Film Industry Coverage 03/06

Buy The Book from

01. Great NEW intensely-packed features of this new 432-Page Book: COLLECTOR’S EDITION. Super Fast Format – read it in 3hrs! The book has been written in a new Super-Fast script-like format, which is both a novel and a faster way of communicating the dialogue.

02.
$10,000 Prize Film Scholarship & Entry-form are contained in the back of the book calling for New Up-&-Coming Filmmakers… “Make Your Own Film” within the guidelines of the Competition and get it featured prior the Opening of the New Strongmen Feature Film.

03.
Includes 37 extra scenes not seen in the film.

04.
Intriguing Origins of the Strongmen

05.
Visualisations of the Alternate Worlds

06.
Storyboards from the feature film

07.
Acting Role Opportunities for “New Talent” interested in the Sequels

08.
Strongmen Profiles of each of the Nine Characters and Super Villains

10.
2% of the wholesale price of this book goes to Youth Care Homes

13.
A 7-page behind the scenes session on the contained power of the Strongmen way of thinking, entitled “Mortal Dilemmas” by Kimarie Charteris

16.
Introduction Special Writer-Director Edition Featuring an Introduction by Science Fiction Writer Hal Colebatch Signed by the Author at the Special Book Announcement at Chesters Lounge Many of these features have never been seen in a book.